The Historical Tombs of the Martyrs of Gomal Valley

The spread of Islam in South Asia brought in its wake the tradition of funerary architecture in India, where no such custom existed. In medieval Islamic society, the commemoration of the dead and their celebration in architectural form was reserved for the powerful and wealthy. Over the course of centuries, a large number of tombs and shrines of the spiritual and political Muslim elite began to dominate the Indian landscape. Housed in aquatic or botanical settings, this funerary architecture became an essential part of royal customs, with all the ruling Muslim dynasties in South Asia endowing huge sums of money towards building tombs and shrines for saints and the members of the royal families. Commemorating the death of notable figures was intended to sustain spiritual and dynastic ties and perpetuate their memory. Pakistan has inherited this tradition of funerary architecture for the commemoration of national heroes, starting from the mausoleum of Quaid-i-Azam Muhammad Ali Jinnah, the Founding Father of the nation.
Death, burial and commemoration were significant elements of the social order of Islamic societies in South Asia, and these funerary practices were fundamentally different from the indigenous Hindu population, which practiced cremation, leaving no earthly marks of the deceased. The very existence of monumental tombs could have been perceived by the indigenous population as visible landmarks of the conquest of India. The anthropology and architecture of the funerary landscape of the early Muslims in South Asia was as variegated in scope as it was elaborate in design.
Perhaps rooted in the customs of Sufi festivals, known as Urs or mystic wedding, these funerary practices included prayers and recitation of Quran, as well as hymns sung as Qawalis. The free distribution of food for visitors on the shrines – langar – was widely practiced. From the choice of burial sites, the style and setting of the graves, and the architecture to house the graves, the scope and design of funerary practices was wide. This architecture, coupled with the variety of ways in which funerals were organized and rituals of death practiced, allows us to talk about funerary practices as a combination of religion and art.

Lal Mahara being a war memorial to early Muslim nobles and princes, who may have lost their lives in a battle, possibly at the hands of the Mongols who had begun ravaging the Indian hinterland. Those killed were honored by the Sultans of Delhi through the creation of these monumental mansions to house their remains. Perhaps military historians can scrutinize the early history of conquest and lay bare the true identities of those early Muslims who laid down their lives, to establish and protect their homeland in South Asia.

The ‘anonymous tombs in the Gomal Valley’, as they are called by scholars of Islamic architecture and archaeology, are situated at Lal Mahara, 50 km from south of Dera Ismail Khan, Khyber Pakthunkawa (KP), and are among the earliest examples of an elaborate funerary architecture in South Asia. Due to its topographical features, the Gomal Valley has been a site of human habitation from prehistoric times, and followed the same cultural patterns of the development of villages and cities as the Indus Valley Civilization. As a major gateway to India, caravan routes through the Gomal Valley connected India with Afghanistan and Central Asia.
Locally known as Andhiray, which is said to be a corruption and combination of two words; Hindi (India) Rah (Way), this funerary complex may have been situated along the old caravan route. The funerary complex comprises eleven tombs, out of which only four survive today. In addition, there are hundreds of graves which have been preserved due to the conservation efforts of the Department of Archaeology in Pakistan, beginning in the 1970s. The Central Asian influence is dominant in the architectural style of the tombs, and their precursors are found in Bukhara and Chisht. Based on comparisons of architectural styles, art historians attribute the funerary architectural complex of Lal Mahara to the eleventh or twelfth centuries, i.e., in the reign of Mahmud of Ghazni (971–1030) or the later Sultans of Delhi. 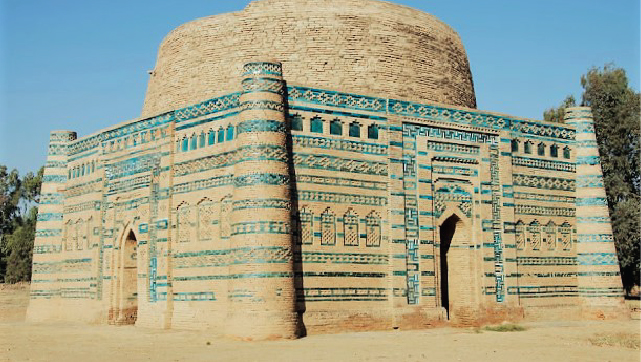 In terms of their key design features, the tombs combine religious and military architecture. All the tombs have an exposed brick façade, and are square in plan with tapering turrets at the four corners. Inside, stylised squinches, some decorated with blue tiles others plain, give an eight-sided shape to the square plan of the tomb to form the base of the drum for the dome. All sides of the tomb have an arched entrance, except for the one which is a mehrab, facing west. Two tombs measure 23′ 8″ externally and 18′ internally. Bricks and mud mortar have been utilized for construction, and glazed turquoise tiles with geometrical and floral patterns for exterior ornamentation. Some bricks have signs of writing on them, and bricks with Quranic verses have also been found which are preserved at the Peshawar Museum.
The multiple layers of cultural reception, can be observed in the design and use of materials in the funerary complex at Lal Mahara. The Indian arches of the Hindu Shahi temples of Dera Ismail Khan, which in turn draw from the sacred architecture of Gandhara, and the mehrabs of tombs of Lal Mahara share a similar visual vocabulary, learnt and transmitted over time to the successive generations, sharing the same human geography. We can imagine that generations of local artisans who were building Hindu Shahi temples in seventh century were constructing the tombs of Muslim dynasties a few centuries later in the same region.
Historically, the funerary complex at Dera Ismail Khan is a precursor to the tombs of the family of saints of Multan, in their time considered the Baghdad of the East. These shrines of Shaikh Bahauddin Zakariya and Shah Rukn-e-Alam, built in the 14th century, are considered to be among the best examples of early Muslim funerary architecture in India. Meanwhile, the tombs at Lal Mahara remain obscure monuments in their present distant location; far away from the main road networks of Khyber Pakhtunkhwa. Despite the utter state of neglect they have endured for close to a millennium, it is a remarkable architectural wonder that the funerary architectural complex of Lal Mahara has survived to this day, still equal in grandeur and designs to the shrines in Multan, and certainly larger in scope and size.
Art historians have long commented on the similarities between the shrines of Multan and the funerary architectural complex of Lal Mahara in terms of style and decoration of the construction. However, a striking difference between the two is that the tombs of Multan venerate the lives of saints, the anonymous tombs of Gomal Valley commemorate the death of the martyrs of a great war, which was forgotten by historians.
A perplexing feature of the tombs of Gomal Valley is that there are no traces of the funerary practices associated with the commemoration of dead in shrines and cemeteries in South Asia. In contrast, for the contemporary locals, the historical site is a place of fright and wonder and is generally deserted except for the occasional tourists. With no archaeological traces of gradual development of the site, it is understood that the anonymous tombs were built at the same time. Moreover, unlike a cemetery or graveyard, where people are buried over time, the tombs were populated with a group of people whose deaths occurred at the same time, likely to be the casualties of a war. Therefore, unlike a cemetery, the primary purpose of the funerary architecture of Lal Mahara was not simply to house the dead, but to glorify their death as martyrdom, and to serve as a visible reminder of the dead for the living. The vertical height of the tombs in design can also be read as a symbolic representation of the deceased rising to the heavens.
Sadly, the funerary monuments of Lal Mahara do not have any descriptions, nor do any historical records exist to lift the veil of anonymity on those whose memory they perpetuate. Local legends allude to the possibilities of the funerary architectural complex of Lal Mahara being a war memorial to early Muslim nobles and princes, who may have lost their lives in a battle, possibly at the hands of the Mongols who had begun ravaging the Indian hinterland. Those killed were honored by the Sultans of Delhi through the creation of these monumental mansions to house their remains. Perhaps military historians can scrutinize the early history of conquest and lay bare the true identities of those early Muslims who laid down their lives, to establish and protect their homeland in South Asia.